How Vegans and Omnivores Can Co-Habitate Peacefully

Throughout the course of our lives, we may find ourselves having to share a living space with others who have routines and diets quite different than our own. In our case, vegans and omnivores had to share a household. One can imagine how those of such polar opposite morals and diets would not be able to co-exist. True, it can be difficult, yet we’ve found the following practices to have led to a harmonious living situation.

As with any negotiation where two sides have expectations, it’s important to have a clear idea of what you want. First, privately list your expectations, and have your omnivore housemate do the same. Do so by envisioning your routine on a typical day and ask yourself the following: how much fridge, freezer, and pantry space do each of you need? How often or how many meals do you want to cook per day? For how long do you need the kitchen for cooking? To which smells and fragrances do you have an allergy, or just can’t stand without a wave of nausea? Be sure to explain your reason for this last question. Many will think it’s being “over-dramatic” as they neglect to think about the effect of odors, but explain that it’s due to a physiological aversion that you can’t control.

As you both sit down to discuss your lists, begin with why you’ve adopted a vegan lifestyle. Explain that it’s not to make anyone’s life more difficult. Rather, it’s a moral and lifestyle choice that is just as important as anyone’s religion or health needs. Moreover, mention how setting these ground rules will make sure you know what to expect from each other. Explain how they should think of veganism more like an allergy or a kosher meal choice—food will need to be prepared separately and potentially with different cookware. After all, would you ask a diabetic to eat more sugar or an Orthodox Jew to eat a cheeseburger? As the omnivore shares their list, make a note of any detectable conflicts and ask which of those can be negotiated. Once you make your agreements, be sure to routinely ask how they’re feeling about them. You’ll not only appear compassionate, but you’ll also be aware of any emotional friction before it has the chance to become an argument.

Partition the Fridge and Pantry

Food storage can be a very emotionally volatile issue—especially in households in which the inhabitants have very different diets. The first most effective way to avoid contention is to designate which side or drawers in the fridge can be allocated to whom. Make sure none of the animal products will contaminate your provisions with their drippings or aroma. While you’re at it, keep as much meat and cheese in their own separate drawers in order to contain drippings and smells, and give yourselves separate shelves so no one is confused as to what belongs to whom. If there is risk of that, look into purchasing or fashioning trappings or partitions for that model of fridge. Lastly, do the same for dried goods in the pantry. 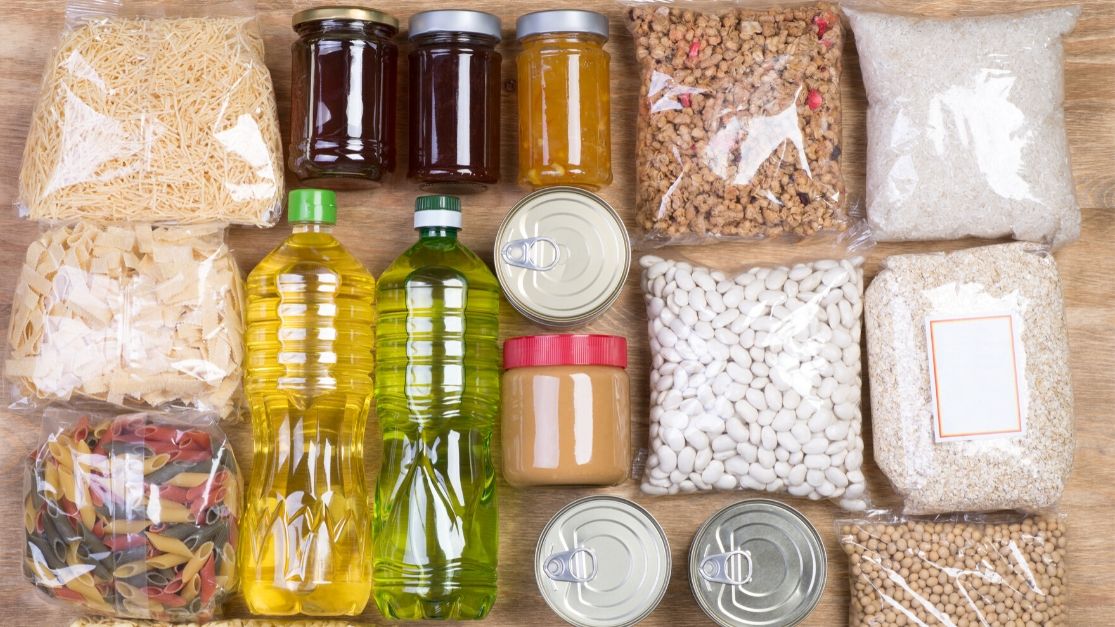 The kitchen is perhaps the most commonly used space in the entire household, which means that it can easily become a battleground of moral arguments between vegans and omnivores. It is possible, however, to avoid conflicts here, too, through some planning. First, cook for the week, or at least a few days, in advance, and let your housemate know when you will do so. This will lead to fewer chances of awkward overlaps of your cooking times and having them cook something non-vegan in your presence. You’ll also save plenty of time throughout the week as your meals will already be prepared!

Of course, preparing meals can be an opportunity for introducing omnivores to the deliciousness and benefits of a plant-based diet. It all depends on whether or not your omnivore housemate is open to learning.

Take the opportunity to introduce the omnivores to how excellent plant-based cuisine can be. Offer to cook a meal when the time is right, and have them cook it with you. Start with a recipe that is familiar to them and veganize it, showing them that they aren’t missing out on anything by eating plant-based. On the contrary, show them how many more exciting flavors are possible! If they are interested to learn about the vegan lifestyle beyond the food, use this time to show them light-hearted vegan documentaries – i.e., Don’t start with Earthlings. Try The Game Changers first and go from there.

If you know or can tell that the omnivore is not willing to learn about veganism or be open-minded about anything in regards to your lifestyle, then stick to having separate times in the kitchen. Who knows? Maybe the delicious smells that you make in the kitchen will eventually change their mind. Whatever you do, don’t be passive aggressive, or straight up aggressive, about your vegan activism. That will only push them further away from wanting to learn about veganism.

Veganism Beyond the Kitchen

Veganism is a lifestyle, not just a diet. If you choose to live with omnivorous housemates, you might find certain items in their house offensive, such as leather couches, aprons with a bacon print, or (the worst of them all) taxidermy as their decoration of choice. If you are living with them temporarily, then we would suggest you choose your battles as you are a guest in their house. (Maybe, they might be willing to temporarily remove the taxidermy?) If you are choosing to live with each other long-term, then you both need to have a discussion similar to your kitchen discussion above. You may not be able to get them to exchange the couch for a vegan alternative as it’s a high-priced item, but you might be able to get them to agree to take down the taxidermy, or only wear pro-meat wardrobe when you’re not in the house. Regardless, we suggest choosing your battles as sometimes the kindest choice is to compromise.

It’s never more important than to be honest with ourselves and others about our beliefs when we have to share a living space. With such honesty and the willingness to plan ahead, even the most seeming adversaries—like vegans and omnivores—can co-exist.

Do you want to read more articles like this one? Make sure to sign up for our newsletter in the form below.

📍 Vancouver, BC
An #ethicaltravel couple helping you explore the world without sacrificing your #vegan lifestyle.

NEW BLOG POST: Are you currently dreaming about #N

Are you a long-time vegan? Vegetarian or flexitari

We just published a new guide to vegan restaurants

Our latest blog post in our Kind Conversations col

Today is a VERY special day. You might have alread

50 Things to Do in Providence, Rhode Island